By the end of this webinar, participants will be able to:

Across all sectors, when we talk about data, there is a presumption of neutrality. However, when we presume neutrality, we are simply replicating structural racism. What does this mean for the data we use and share? The data that goes out into the world and shapes not only our individual narratives, beliefs and values but it also informs policies and practices. Through the use of some examples of the work being done at the Massachusetts Tobacco Control and Prevention Program, we will discuss and see how data can transform our conversations and the policies we create. Showing data on infant mortality by race without the added layer of structural racism will simply replicate what we have unsuccessfully been doing in public health for the last few decades. Let's stop showing the data without the 'why'.

Meenakshi Verma-Agrawal is the Assistant Program Director and Associate Professor of Practice at MPH@Simmons. Prof. Verma-Agrawal began working with Simmons University in 2018 as the course designer for the Boston immersion: Racism, Oppression, and Health. Her areas of expertise include public health, organizational development, and racial justice. In addition to her role at Simmons University, Professor Verma-Agrawal provides trainings to community-based organizations, public agencies, and corporations on how to lead with a racial justice analysis. Her clients include Massachusetts Department of Public Health, Massachusetts League of Community Health Centers and Brigham and Women's Hospital's Center for Community Health and Health Equity. She has been on the board of the Southern Jamaica Plain Health Center for the last 10 years. Professor Verma-Agrawal’s work in racial justice is grounded in the training and mentorship from the Southern Jamaica Plain Health Center’s Health Promotion Center, which focuses on the work of racial justice both inside and outside the health center. In 2016, Verma-Agrawal co-led The Summit on Race and Equity, a two-day conference held in Boston. From 2016-2017, she was a Fellow with Blue Cross Blue Shield's Massachusetts Institute for Community Health Leadership, with a co-hort of some the most impactful leaders in public health, government, nonprofits and health care.

For the past 15 years, Professor Verma-Agrawal has worked with family foundations, small and large nonprofits, and start-up organizations, both locally and internationally. While working in Bombay, India, Professor Verma-Agrawal conducted a citywide public health analysis resulting in systemic changes in the city’s approach to patients’ rights and regulations. As a Professor, consultant and trainer, racial justice is the common thread throughout her work. Professor Verma-Agrawal racializes as Asian and is ethnically Indian, and is an immigrant; and her work is rooted in building solidarity with other people of color in a collective movement toward liberation. 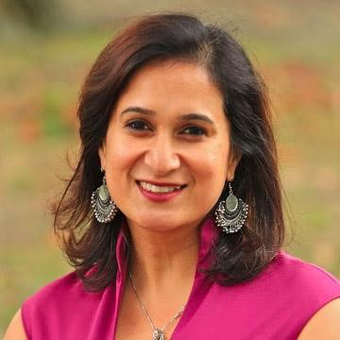